So, can you guess which of the following two phones, a Tizen dev phone and an Openmoko Neo Freerunner (in practice a dev phone too) has or ever had 3D acceleration? 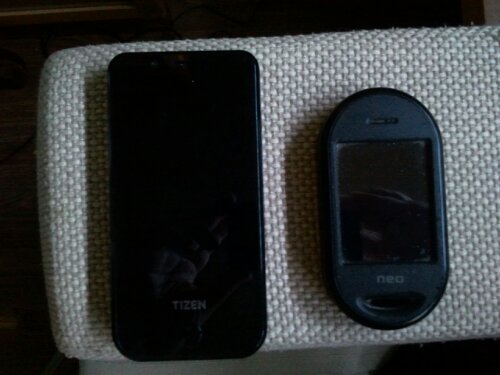 The one on the right never had 3D acceleration since it was made in 2008 (would require an unavailable blob, but it neither had the bandwidth for that), while the one on the left actually cam with 3D acceleration but lost it after flashing an upgrade image and there’s no legal way to get it back.

So… what happened? I found out that on June 13th a Tizen update was published. I hoped it would fix the phoning issue, making it finally possible to make calls (hint, it doesn’t solve that issue either), so I flashed it (it was a pretty easy and painless flash).

Reboot and… What.The.Hell? It was now very slow, almost as slow as the OpenMoko’s interface. There’s is no warning anywhere near that image, and being development snapshots I would expect a problem or two, a fix or two, etc… but not this… oh no… not this…

Apparently, the ARM Mali graphics chip that is inside requires distribution only with the hardware, no software distribution.

As such, no Tizen update can be installed without actually crippling the phone’s performance, and now I have no legal manner to get the driver back into the phone.

Knowing this, like Samsung must have known, the least Samsung should have done is keep a separate partition with the driver which would be mounted on system startup, thus providing the driver to any software update that they publish.

But oh no… that would be, what… too much trouble? Nobody would notice the performance loss? 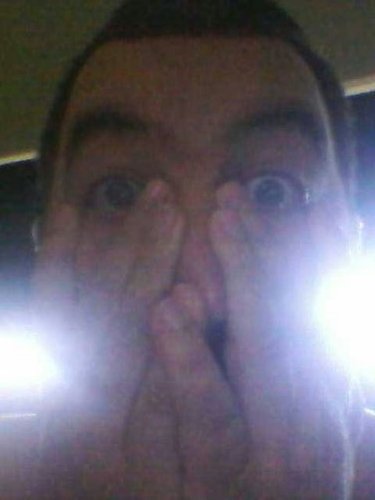 I guess all that remains is try to boot from SD, if that is possible, then maybe one can setup an OpenEmbedded profile and perhaps get a real development platform for the phone.

One can only dream… but… this Tizen 1 dev phone looks more and more like a brick. Maybe it’ll be a shiny paperweight soon.

So, can you guess which of the following two phones, a Tizen dev phone and an Openmoko Neo Freerunner (in practice a dev phone too) can make and receive calls?

The one on the right has been able to make calls since I received it in 2008 (albeit without buzz only after one year after a hardware patch performed by my heroes at TuxBrain at DebConf 9), while the one on the left, doesn’t even detect the SIM card.

The one on the left is made by a very successful phone maker with deep pockets, Samsung, while the one on the right was made in 2008 by a small company that had more will than capacity to do a great phone, OpenMoko, and still today carries my personal SIM with which I call and get calls from people, using a truly community built distribution based on OpenEmbedded called SHR.

This was my first #facepalm moment with this device with which I was very excited and had lots of expectations.

I know the price isn’t very cheap, but we aren’t a big company able to order in bulk hundreds of thousands of devices, if not millions, so 449 € + shipping for the first batch if we get 400 buyers will help get this phone into the hands of some Free Software developers.

Some reasons to buy one of these (the tricky part is having a Freerunner case if you want to use it as a phone):

I would fit somewhere between 1 and 2 except I can’t afford 449 € on this, so I’m kind of hoping for someone circa number 5…

I’ve just released omnewrotate 0.5.8 which integrates Tim Abell’s improvements to rotation sensitivity and I’ve added some code so it is smarter about detecting the paths for setting the brightness level while rotating which changed in more recent Linuxs (2.6.32 and beyond, I think).

As I’m running SHR-Unstable, your mileage may vary but it’s likely it will work 🙂

As usual, the download links are at the project’s Google Code site for omnewrotate (see the featured downloads section):

SHR-Unstable users should only need to upgrade (later today, or in a day or so).

After about 11 months since the previous release, I’ve just released omnewrotate 0.5.7 (after short lived 0.5.5 and 0.5.6 as I found out a dangling patch in SHR-Unstable’s recipe and did a mistake on the 0.5.6 release) which integrates Tim Abell’s init script change and the aforementioned patch.

As I’m running SHR-Unstable, your mileage may vary but it’s likely it will work 🙂

As usual, the download links are at the project’s Google Code site for omnewrotate (see the featured downloads section):

It seems the problem with those weird libcurl errors when you enabled the secure option (basically https) is that the ca certificate bundle is missing in SHR’s OE build (perhaps it’s on all OE builds, don’t know).

There is, fortunately, an easy way to fix it (as mentioned in the openmoko communiy list).

All you need to do is copy your own ca certificate bundle (in Fedora it’s /etc/pki/tls/certs/ca-bundle.crt ) into the proper place for OE’s path: /etc/ssl/certs/ca-certificates.crt

So now you can enable secure, rather than faster 🙂

So there you go, download if you’re too impatient to wait for SHR-unstable to update 🙂

Hi everyone! ElmDentica hasn’t had a new release for a while (*cough*cough* proving it works so well *cough*cough*), so I though I should share with you the new stuff in the development of this release.

So that’s about it… you can get the package from the usual places, the project’s web-site, by upgrading shr-unstable as it upgrades elmdentica on next autobuild, building it yourself, etc…

Remember when Nokia wanted to give a lesson regarding software patents to Free Software people? Like «they’re ‘m’kay? We know best, m’kay?»

It is also being branded as so “open” that software freedom lovers would love it. This seemed like really good news, no? Well, like the saying goes… when it’s too good to be true… it most probably ain’t.

I tried to figure out how “open” the device is, and wasn’t really happy. After more than 70 comments, Quim (who works at Nokia) spills the guts:

Nobody claims Maemo is the 100% free mobile OS and the N900 is the 100% free mobile device. I claim is currently the most interesting combination for a free software lover thanks to its standard Linux stack, possibility to modify the platform and access to the root. The % closed helps Nokia getting a sustainable business model and reaching consumer appeal.

Well, nice claim, but it is the idea that you (and Nokia) are selling. And worse of all, you seem to pretend that in 100% of an operating system, all % are of equal value. They’re not. The minimum percentage that is proprietary is essential for Nokia’s GNU/Linux devices to work. Take it away, and they won’t work, or might even burn in your pocket. Period.

No it’s not. There’s better if you want 100% freedom, what OpenMoko started. The company may now only be selling Freerunners to resellers who want to keep on with the business, but there’s new sources of hardware showing up (thanks go mainly to John ‘MadDog’ Hall who’s been in talks with the University of São Paulo, in Brasil), so no, the phone is not dead. It is actually growing a lot better and faster now it’s free from the corporate strings of OpenMoko, which partly restricted the flow of things.

But I digress, let’s get back to Nokia and its bullshit and insults to the Free Software community (I use Free Software because I prefer to talk about freedom, but these insults and bulshit also apply to you, Open Source guys, so pay attention).

There’s a wiki page in Maemo explaining why there are some proprietary software. That page needs to be passed by the bullshit filter, like I said in my comment, Nokia is far from being friendly to Free Software. They’re actually quite aggressive and strongly lobby for the legalization of software patents in Europe. Don’t be fooled by the sugar coating, they are not your friend. So what is in the wiki page after you pass the bullshit filter?

While the “security” aspect could be of some value for some people, let me give you an example of how much crap it is:

Nokia’s batteries are dumb. So dumb, in fact, that their phones have to know what batteries they carry in order to not overcharge.

What if the battery was smarter, and had a way to tell the operating system it’s full? If a little company like OpenMoko had it, why wouldn’t Nokia have it? It’s one of the most dangerous equipments in the phone, so I guess that’s what they refer to when they talk about security and some of the energy related software is *closed*.

Sorry, disappointing. Will wait for the competition unless this changes.

BTW, someone said that even OpenMoko has some proprietary software… well, as Mickey Laurer explained it…

None of the Nxx tablets are fully functional with free software. The FreeRunner is.»

So there you go! There’s much better, in terms of freedom, so don’t settle for less just because it’s fancier.

Demand more! It’s your right as a software user, and your power as a consumer.

ElmDentica (the Tuga release), is now translatable and the first included localization is Portuguese (hence Tuga) 🙂

It will also now launch a browser if you confirm after pressing on a link. Right now, the following browser choice is made: